Shepherdstown was originally settled in 1734 by Thomas Shepherd.  It was officially chartered in 1762 making it the oldest town in West Virginia.  The town and surrounding areas were greatly affected by large national events such as the American Revolution, John Browns Raid, and the Civil War and was even  the site where James Henry Rumsey launched the first ever steamboat in 1787.  Following the American Civil War, Shepherdstown found itself in almost complete ruin having served as a boarder town throughout the war, a hospital after the battle of Antietam, and the site of the last battle of the 1862 Maryland Campaign.  The town was saved from collapse with the creation of Shepherd College.  By 1914 the town was once again thriving as a typical small college town.

Race Relations at the Time
Shepherdstown and the area found itself in the midst of difficult race relations as did most towns below the Mason-Dixon line. The college was segregated with a few African American normal schools around, more famously Storer College in nearby Harpers Ferry.   Furthermore in 1918 the Ku Klux Klan propaganda film “The Birth of a Nation”  was shown at the town Opera House and was described as being “one of the greatest photo-plays that has ever been produced.”  Tensions were not resolved after the war as at Antietam National Cemetery in nearby Sharpsburg opened up for the burial WWI soldiers.  In the back of the cemetery is a separate section for African American soldiers of WWI, ironically segregated at the site of the battle that allowed Abraham Lincoln to announce his Emancipation Proclamation.

Patriotism and the Start of War
Following Wilson’s announcement of war, the town that had at one point looked to remain neutral in the war and proud of its German heritage was swept up in a patriotic buzz.  Following the announcement of war the rumor mill stirred up many stories of German spies in the

area.  Some rumors said that Germans were going to attempt to blow up the C&O Canal located just across the Potomac River from Shepherdstown.  Others suggested plots to blow up the railroad bridge.  Some rumors even stated that groups of people had been arrested for studying the bridge too closely, though newspapers contested that this was true.  The Shepherdstown Opera House also showed very patriotic films such as “Over There” and “The Heart of a Hero.”  The most revealing instance of the new found patriotism was a name change.  The main part of Shepherdstown is located on a street known as “German Street.”  However in November 1917 a proposal was made to the town council to change the name to “Main Street.”  The proposal was easily passed and the street would not return to its original name until the 1960’s. 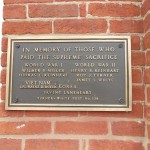 Shepherdstown, like most small towns at the time, quickly began work to do what it could for the war effort.  A large part was an attempt to help with rationing.  At one point girls from the college went through the town getting many housewives to sign a food conservation card.  Furthermore the Shepherdstown Boy Scouts and Girl Scouts assisted town residents in planting crops and gardens.  The town has few records on soldiers who actually served in the war though there is a plaque on the War Memorial Building that lists two names, each of which were Shepherd College students who died in the First World War.